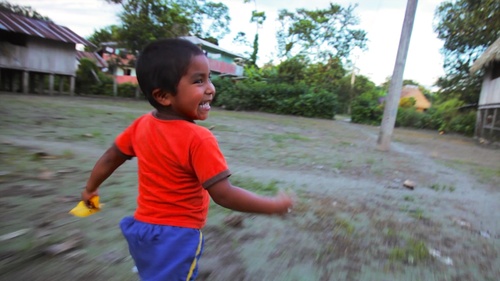 Randy Borman has a way with words. It was obvious from our first communication. His commitment, enthusiasm, vivid descriptions and willingness to encourage EcoTripMatch.com’s development from the very beginning absolutely stood out. Now….I want you to meet Randy. Not only do his answers to my questions explain the purpose of ecotourism so precisely, his story is riveting. If you ever wonder “why ecotourism”, you will understand after reading this.

Why did the Cofan ecotourism community project begin?

To understand this, you have to go back to the Ecuadorian rain forest of the late 1970s.  As Cofans, we had just experienced the tremendous shock of being invaded- in every way, culturally, physically, spiritually- as oil was discovered by a multinational consortium headed up by Texaco and Gulf.  We had gone from less than three hundred people living in the vastness of literally millions of acres of pristine rain forests, rivers, mountains, and wetlands in 1964, with unlimited resources and freedom, to being a landless, right-less remnant in a seething milieu of oil workers, colonist farmers, lumbermen, oil plantation corporations, and an expanding government bureaucracy that sought to control everything by 1974. The impact on a small rain forest culture cannot be over-stated. In our own house, we were no longer owners of anything- in our own world, we were no longer even considered to be people.  Numerous well-meaning, but cynical anthropologists, government officials, and academics wrote us off- “the Cofan will disappear within another decade”.

I returned from a couple years of college in the US to find my people landless, rightless, and frightened in a way only a wild prey surrounded by predators may understand. While I had no great command of Spanish, or understanding of the Ecuadorian culture and system, I also knew that if we didn’t fight back we were doomed, exactly as the anthropologists were predicting. I began, using the age old Cofan technique of slow and painful consensus-gathering, and finally was able to mobilize people to begin a series of trails which would at least serve as visual boundaries for a small piece of our once-extensive territories. By 1978, this work translated into our first land title- for a mere 20,000 acres- but certainly a beginning.  Meanwhile, I was acutely aware that we also needed money- the days of hopping into a home-built, dug-out and poling for three days to get to someplace were rapidly vanishing.  We needed money, we needed motors for our boats, we needed to begin to find a niche in the outside world’s economy.

I worked briefly as a living-allowanced volunteer in Guatemala and saved back enough funds to buy our first outboard.  Five of us got together and built a canoe. And then we put ourselves up on the market as motorboat drivers. The Aguarico is a rapid and whirlpool-filled major river that charges in lives for mistakes made, and to the outsiders flooding into our rain forest, it was a hostile and often deadly environment. But for Cofans, raised on its banks and paddling and poling almost before we could walk, it was the center of our culture and of our lives. So we began to sell our services as motor canoe drivers, and found a ready market for our skills.  By the end of 1978, most of our income was linked directly to our motorboats, and with our new funds we bought more motors and expanded our operation.

Meanwhile, an increasing number of back-packers and other tourists were finding their way into the newly “opened” rain forests that had been our homes.  We started out by hiring out as boatmen to take people from point “A” to point “B”, and also letting visitors pay for the gas and motor costs while we accessed remote areas where we could still find good hunting and fishing- increasingly scarce around our home village of Dureno as oil exploration, clear-cutting for agriculture, and oil related pollution destroyed our resources there.  We were essentially doing tourism, but at this point still didn’t really know it. We would take the tourists along with us on a Cofan hunting trip, complete with hunting, preparing the meat, building the shelters, living our lives as we had done a decade before, but with outsiders as part of the “stew”.  Finally, an  altruistic visitor took me aside and informed me that what we were doing could be charged for- we were guiding, we were providing food and lodging, we were also providing an incredible wildlife and cultural experience.  So- we started formalizing, and by the end of 1979, we were tied in with two travel agencies, advertising our trips, and making considerably more money than we had ever thought possible.  And thus was community-based ecotourism in Ecuador’s northeast rainforests born…

What do you offer tourists that is unique?

From day 1, the unique thing about our brand of tourism has been its total authenticity.  We take the visitor to our home, and show him or her our world through our eyes.  We do come half-way; we don’t make people eat the monkeys or sleep on bark-cloth mats; we try to explain and buffer where cultural sensibilities clash; but basically, we do let the visitor into our lives in a way that the majority of programs only begin to compare.  Once in a while it doesn’t work. I had a very intelligent, very capable doctor on one trip who….missed totally the fact that he had been immersed in a millenia-old culture in a way that cannot be duplicated, and without instruments like tourism to help it survive, may very well disappear in a very few years.

How have your tours impacted the community?

The impact of tourism on the community has been largely positive.  Obviously it is both a primary and secondary source of income- the crew members are also all community members, and so on any given trip multiple families receive direct economic benefits from salaries, tips, and often, gifts of things like ponchos and mosquito repellent that get left behind.  Meanwhile, all community members, especially the women, participate in the informal “market” that is a permanent feature of our trips, where people have a chance to show off their handicrafts- necklaces, miniature blowguns, carrying bags made from palm fiber and much much more- and often individuals with good artifacts come away with more cash than even the crew!  And finally, the community charges go into the over-all administration and maintenance of the community, helping with medical emergencies, presence in important political meetings, and the rest of the community’s activities.

On the negative side of the coin, any business situation in any small community can cause jealousies and hard feelings between people who are more successful and those who are not.  While this has not been a huge issue in our community, neighboring community efforts have fractioned and failed because of this.

However, I think that perhaps the biggest importance of ecotourism for our community has been something completely different than the income production. In a world where values were dramatically attacked during the 1960s and 70s by a dominant culture with a completely different agenda than that of the Cofan, the message from the outside was clear and simple.  Your forest is a useless desert, that needs to be removed quickly and converted into coffee fields and cow pastures. Your love of the forest and forest skills are useless in the modern world. Send your kids to school and teach them to be lawyers and engineers, so they can come back and change your forests into something useful. Your culture, your dress, your language, are all worthless and should be disposed of. Your pride is misplaced. You need to throw it all away and step into our society and way of life.

Tourism, with educated, obviously successful people from other countries, coming to visit and very obviously appreciating the things that Cofans love the most- the animals, the forest, the river- and not only appreciating, but paying good money to access this world- is a counterweight with an infinite value.  It re-instills pride. It vindicates knowledge. It foments good management.  It provides a healthy alternative to the local messages.

What are the challenges you still face and how can people from elsewhere help?

I think this is perhaps the greatest challenge we in the ecotourism industry face as a whole.  The very basis of our world-view is that the world’s remaining wilderness areas, and the cultures that live in close and positive relationship with them, are worth more than anything else to us as humans.  We need our wilderness regions.  As the consequences of the Western culture’s abuse of its environment become more and more evident and as the world’s ability to recover from disasters teeters, intact rain forest or savannah or oceans or mountains or arctic wastes become more and more important for the very survival of the species. Unfortunately, the only truly positive action that the Western world has taken to preserve these wildernesses has been through mechanisms like ecotourism…. not enough, but at least something a group like the Cofans can hang on to as an indicator that the forest can still be worth something, that the culture can still be a viable way of living.

Cofan’s Amazonian excursions can be found on EcoTripMatch.com at this link:

Check out another interview at: https://www.ecotripmatch.com/floating-unique-idea/